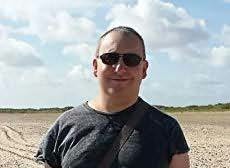 Jason Ayres is a time travel author who lives in the Worcestershire town of Evesham with his wife and two sons.

After many years working in market research he decided to pursue a career as a writer, initially as a columnist with the Oxford Mail. In 2014 he released his first novel, The Time Bubble, which is now an Amazon bestseller. Since then he has written a host of spin-offs and sequels. He describes his writing as a blend of good old British humour with a liberal sprinkling of sci-fi.

Jason’s nine novels to date explore time travel from every possible angle. These include travel both forwards and backwards, exploring changes in the timeline via the multiverse, and offering people second chances in life. Although most of the books can be read standalone, they are all interlinked so characters from one story often pop up in another.

Away from writing, one of his main interests is food! As an official Hambassador, he achieved national press attention in 2013 when he became famous as Britain’s leading sausage taster. After sampling some 300 sausages, he got to choose the winners at the prestigious British Sausage Week awards alongside celebrity chef, Simon Rimmer.

Non fiction
The Sausage Man: The Diary Of A VIP Sausage Taster. (2014)