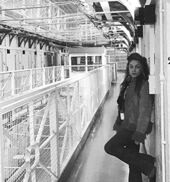 Over the years Edie has worked all over the UK as well as in several other countries and has met a lot of interesting people - several of whom have supplied ideas for some of the characters in her books! She has now settled back in central England with her partner and children, where she is pursuing her writing.
Edie writes gritty gangland fiction, using a combination of thrillers, suspense and romance.
She is currently signed to Boldwood Books for a 5-book gangland fiction series set in Birmingham. The first in the Allegiance series, Takeover was released in January 2022 and the second, Fallout, will be released in May 2022.
Edie's other series are the Retribution series, the Hunted series and the Downfall series - all trilogies.
When she isn’t writing, Edie enjoys reading and is a self-confessed book hoarder. She also enjoys crochet and music as well as loving anything quirky or unusual.
For all news and updates and to join Edie's mailing list, visit www.ediebaylis.co.uk or follow Edie on Twitter @ediebaylis or Facebook
Genres: Mystery