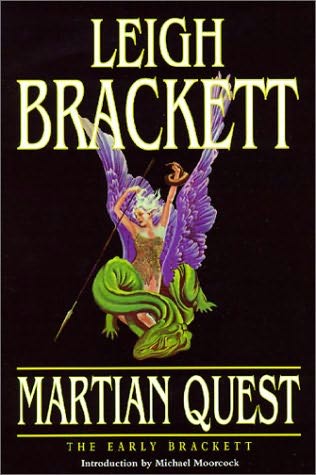 (2002)
The Early Brackett
A collection of stories by Leigh Brackett

Martian Quest: The Early Brackett is a collection of the twenty earliest stories by the undisputed "Queen of Space-Opera."

On a Venus that never was, on a Mars that can never be (but should have been), Leigh Brackett's early stories laid the foundation for her later classic adventures, The Sword of Rhiannon, The Nemesis from Terra, and the "Eric John Stark" series.

Other stories in this collection draw inspiration from such diverse sources as the lost-race novels of H. Rider Haggard, the lush fantasies of A. Merritt, and the planetary romances of Edgar Rice Burroughs. With an appreciation for Raymond Chandler and James M. Cain, Brackett's prose is a unique display of vigorous swashbuckling adventure tempered with a harsh, hard-boiled economy.

The Empire of Time
(Roads to Moscow, book 1)
David Wingrove