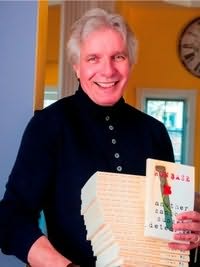 Ron Base was born in Belleville, Ontario, Dec. 9. His bank manager father, Eric, moved the family--mother Jean and younger brother Ric--from Belleville to Cobourg to Picton, and finally to Brockville, Ontario. Here Base finished elementary school and then attended Brockville Collegiate Institute and Vocational School.

He began writing for a weekly newspaper, The United Counties Packet, when he was 15 years old. Based on his work for the weekly, he landed a part-time job at the daily Recorder and Times where he wrote a column for teenagers and worked as a general assignment reporter during the summer. He was also the Brockville correspondent for the Kingston Whig Standard.

He dropped out of high school at the age of 18 but was able to attend the journalism school at Algonquin College for one year in 1967-1968. While at the college, he wrote freelance pieces for the Ottawa Journal.

Although he did not graduate from Algonquin, Base landed a fulltime job as general assignment reporter at the Oshawa Times in the summer of 1968. Three months later, he was hired at the Windsor Star where he wrote obituaries before being assigned to the night desk. Several months later, he was named the paper's media columnist.

After five years at the Windsor Star, Base was hired by publisher Douglas Creighton as a feature writer when the Toronto Sunday Sun began publication in 1973. He wrote pieces for the Sunday newspaper's magazine section and also did the weekly cover story for the paper's TV guide.

After three years at the Sun, he left to work briefly at the Toronto Star, returned to the Sun, just as briefly, before leaving to write magazine pieces. During this period, Base worked for a New York-based magazine syndicate, Writers Bloc, and produced profiles on everyone from actgor Peter O'Toole and former New York governor Nelson Rockefeller to author Tom Wolfe, mystery writer Mickey Spillane, and Robert Blake before he was accused of killing anyone.

Those stories and others appeared in such publications as the Washington Post, New York Newsday, The New York Post, Chicago Tribune, The Miami Herald, and the Los Angeles Times. He also wrote several profiles for Cosmopolitan magazine and freelanced for Maclean's Magazine, first as its television critic and later as a contributing editor writing profiles.

Among the other publications Base wrote for during that period: TV Guide, Chatelaine, Quest Magazine, Canadian Business, and Toronto Life.

During this time, he hosted a syndicated radio show, Marquee Magazine at the Movies and also co-hosted The Movie Show with Alex Barris for TV Ontario. The series lasted for two seasons before being cancelled. He also appeared frequently on the CTV network's Canada AM to talk about movies.

"Heavenly Bodies", a script Base had co written while freelancing, was released by MGM in 1985, and sank at the box office. However, the movie about three young women who start their own workout club found renewed life in the burgeoning home video market, and, much to Base's continuing bemusement, refused to go away, becoming something of a cult hit, complete with an annual screening in Los Angeles.

During this time, Doubleday published Base's first novel, "Matinee Idol". Base left the Star in 1987 and co-produced and wrote a thriller, "White Light", directed by Al Waxman and starring Martin Kove. The film played theatrically in Canada. He also worked with David Haslam, publisher of Marquee Magazine, to produce a number of movie-oriented books, including "The Movies of the Eighties", "Marquee's Guide to the Movies on Video", and "Starring Roles", published in the United States as "If The Other Guy Isn't Jack Nicholson, I've Got The Part".

He lived in Paris for a time where he co-wrote "Jesuit Joe", based on a famous French comic book. The movie was shot in Canada and released in France and Europe.

In 1992, Base moved to Los Angeles. He lived in Beverly Hills for the next five years and wrote "First Degree", a thriller that starred Rob Lowe and was produced by Richard O. Lowry. During that time, Base wrote a lot of low budget thrillers and edited Marquee Magazine.

He moved back to Toronto in 1997 to marry Katherine Lenhoff. The couple moved to Montreal in 2001. While there, Base co-wrote "The Last Sign", a $20 million Canada-France co-production that starred Andie McDowell.

A novel he started writing while in Los Angeles, "Magic Man", finally was published by St. Martin's Press, New York, in 2005.

Base and his wife currently live in the town of Milton, about 45 minutes west of Toronto, but he spends as much time on Sanibel Island as he can. He has two grown children, Joel and Erin, a stepson, Jonathan, and four grandchildren, whom he adores.