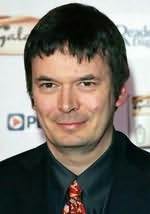 aka Jack Harvey
Born in the Kingdom of Fife in 1960, Ian Rankin graduated from the University of Edinburgh in 1982, and then spent three years writing novels when he was supposed to be working towards a PhD in Scottish Literature. His first Rebus novel was published in 1987, and the Rebus books are now translated into twenty-two languages and are bestsellers on several continents.

The Sound of My Voice (1987)
Ron Butlin
"Playful, haunting and moving, this is writing of the highest quality."

Mortal (1998)
Andrea Badenoch
"A first novel of chilling intensity, a mystery which also happens to be a dissection of desire, friendship and obsession."

Night Trap (1998)
(Alan Craik, book 1)
Gordon Kent (Christian Cameron)
"Here's a thriller that really flies. Gordon Kent knows his subject at first hand and the expertise shows on the page: high stakes, pounding tension and the best dogfights put on paper. A lot of thrillers these days, you come away feeling like you've been in a simulator. In NIGHT TRAP, Gordon Kent straps you into the real thing. Enjoy the ride!"

Lie in the Dark (1999)
(Vlado Petric)
Dan Fesperman
"A quite astonishing first novel which injects the reader into the heart of the darkness which was Sarajevo at the height of the Yugoslav conflict. Reading this book is like being there. If Fesperman had taken me any closer to the action I'd be demanding a flak jacket. At the book's core is a police detective, a man who must deal with the conflict while never wholly understanding it, who must investigate one meaningful murder while those around him seem inured to daily slaughter. This is a humane and moving book, a great crime novel. A great novel, period."

Exile (2000)
(Garnethill, book 2)
Denise Mina
"One of the most exciting writers to have emerged in britain for years."

The Big Ask (2001)
(Murray Whelan, book 4)
Shane Maloney
"Maloney just gets better, and Murray Whelan remains one of the most reliable and rewarding sleuths in the business."

The Nature of the Beast (2001)
Frances Fyfield
"Her knowledge of the workings of the human mind - or, more correctly, the soul - is second to none."

Hot Potato (2003)
(Fizz and Buchanan, book 7)
Joyce Holms
"Joyce's humour is sharp without being nasty, her characters well drawn, and her Edinburgh a place you'll want to spend time in."

Whales for the Wizard (2005)
Malcolm Archibald
"A rip-roaring adventure-mystery with terrific detail of place, period and shipping lore."

Faro and the Royals (2005)
(Inspector Faro, book 14)
Alanna Knight
"Alanna Knight could hardly be better, with a crime novelist's insight into motive and aftermath."

The Prince of Bagram Prison (2008)
Alex Carr
"Takes the reader for a seriously fast and scary ride. You'll end up checking your reading chair for a seatbelt."

Londongrad (2008)
(Artie Cohen, book 8)
Reggie Nadelson
"Nadelson's take on a London of oligarchs fuelled by money from the 'new' Russia."

The Girl Next Door (2014)
Ruth Rendell
"Probably the greatest living crime writer in the world."

Snowblind (2015)
(Dark Iceland, book 1)
Ragnar Jónasson
"A modern Icelandic take on an Agatha Christie-style mystery, as twisty as any slalom..."

Papercuts (2016)
(Papercuts )
Colin Bateman
"He just seems to get better and better."

The Last of Us (2016)
Rob Ewing
"Gripping and utterly believable."

A Rising Man (2016)
(Sam Wyndham, book 1)
Abir Mukherjee
"A Rising Man is a whodunit set in the social and political tinderbox of 1919 Calcutta - a thought-provoking rollercoaster."

The Intrusions (2017)
(Carrigan and Miller, book 3)
Stav Sherez
"A Silence of the Lambs for the internet age."

Dr. Jekyll and Mr. Seek (2017)
Anthony O'Neill
"Being a huge fan of the original, I was skeptical about this sequel, but it was clever, gripping, and reverent. Recommended."

This is How it Ends (2018)
Eva Dolan
"Elegantly crafted, humane and thought-provoking. She's top drawer."

Kill 'Em All (2018)
(Kill Your Friends, book 2)
John Niven
"A bruising triumph; Amis' MONEY for the Trump generation. What a monster he's created."

For The Good Times (2019)
David Keenan
"I've read a fair amount of 'Troubles' literature down the years. This is up there with the very best."

To Kill the Truth (2019)
(Maggie Costello, book 4)
Sam Bourne
"A Day of the Jackal for these dizzying times."

Breakers (2019)
Doug Johnstone
"This may be Doug Johnstone’s best book yet. An unsparing yet sympathetic depiction of Edinburgh’s ignored underclass, with terrific characterisation. Tense, pacey, filmic."

The Doll Factory (2019)
Elizabeth Macneal
"A stunningly confident first novel with a real sense of period and place . . . thoroughly engrossing."

A Shadow Intelligence (2019)
(Elliot Kane, book 1)
Oliver Harris
"Oliver Harris is always pure quality and I'm loving the hell out of his foray into the contemporary spy novel."

Here To Stay (2019)
Mark Edwards
"A horribly convincing portrait of the in-laws from hell. I kept wanting to tear my eyes away but had to keep reading."

The Stranger Inside (2019)
Lisa Unger
"A touch of Jekyll and Hyde in this story of murder, vengeance and bonds of friendship. Fine stuff."

The Ruins (2020)
Mat Osman
"There's a touch of Pynchon in this complex, woozily dream-like novel about music, mystery and imagined worlds..."

The Point of No Return (2020)
Neil Broadfoot
"A true rising star of crime fiction."