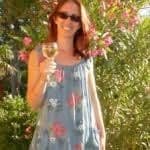 Joanna Courtney has wanted to be a writer ever since she could read. Joanna is fascinated by defining moments in history and she loves nothing more than immersing herself in the world of Anglo-Saxons, Normans and Vikings.

The Hourglass (2017)
Tracy Rees
"Florence is such a strong, intriguing character and the plot is so clever, real and truthful. The whole book feels so very wise, as if it contains half the answers to life."