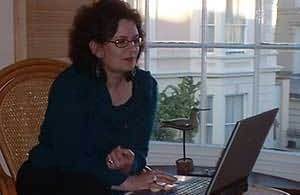 aka L M Connolly
Lynne was born in Leicester, England, and lived in a cobblers shop with her parents and sister. It was an old house and most definitely haunted, but she didnt find out until she left that her great uncle had hung himself in the living room!
But she thinks their ghost might have been older than that. It was built on the site of the old Roman cemetery, and the land had been constantly inhabited, being in the centre of town. Then, when the council bought the house from them to build a road, Lynne's grandfather retired and her father went and worked for the Post Office. Lynne's mother was a sample machinist; that is, she worked with designers on the prototypes (models or samples) of garments. So Lynne was very well dressed!
Lynne's mother's side of the family are Romany gypsies, although sadly they haven't any of the old trailers that are so astonishingly beautiful. Lynne was taught to read the Tarot cards, and she usually uses two packs; the Rider pack for simple readings and the Crowley Thoth pack for the complex stuff.
Lynne has always had an interest in the paranormal and it's been a delight to be able to put some of this into her novels.