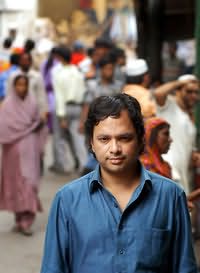 India (b.1961)
Husband of Melanie Abrams
Vikram Chandra was born in New Delhi.

He completed most of his secondary education at Mayo College, a boarding school in Ajmer, Rajasthan. After a short stay at St. Xaviers College in Mumbai, Vikram came to the United States as an undergraduate student.

He then attended the Film School at Columbia University in New York. In the Columbia library, by chance, he happened upon the autobiography of Colonel James Sikander Skinner, a legendary nineteenth century soldier, born of an Indian mother and a British father. This book was to become the inspiration for Vikrams novel, Red Earth and Pouring Rain. He left film school halfway to begin work on the novel.
Novels
Red Earth and Pouring Rain (1995)
Sacred Games (2006)