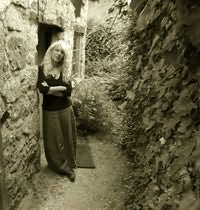 (b.1958)
Terri Windling is a writer, editor, artist, and passionate advocate of fantasy literature. She has won six World Fantasy awards for her editorial work and the Mythopoeic Award for her novel The Wood Wife. She has edited over thirty anthologies, many in collaboration with Ellen Datlow--including the Snow White, Blood Red adult fairy-tale series, The Armless Maiden, Sirens, The Green Man, and Swan Sister. She has also written children's books and articles on myth and folklore, and she edits the Endicott Studio Online Journal of Mythic Arts website. She divides her time between homes in Devon, England, and Tucson, Arizona.

From the Files of the Time Rangers (2005)
Richard Bowes
"Richard Bowes - along with Charles de Lint and Emma Bull and Francesca Lia Block - has been one of the pioneers in the field of 'urban fantasy' exploring mythic stories set in contemporary urban settings."

The Habitation of the Blessed (2010)
(Prester John, book 1)
Catherynne M Valente
"Valente is one of the most intriguing young writers working in the mythic fiction field today. Her work is lyrical, unusual, ambitious..."

The Emerald Circus (2017)
Jane Yolen
"In this masterful collection, Jane Yolen draws upon myth, fairy tales, history, poetry, and children's classics from Alice to Oz to fashion new tales from the bones of the old. There is simply no better storyteller working in the fantasy field today. She's a national treasure."