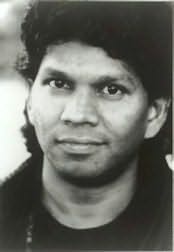 Guyana (b.1955)
Cousin of Cyril Dabydeen
David Dabydeen is a Guyanese-born critic, writer and novelist.

Dabydeen was born in Berbice, Guyana, his birth registered at New Amsterdam Registrar of Births as David Horace Clarence Harilal Sookram and moved to London, England to rejoin his father, attorney David Harilal Sookram. He read English at Selwyn College, University of Cambridge, United Kingdom, and was awarded a Bachelor of Arts with honours. He then gained a Ph.D. in 18th century literature and art at University College London in 1982, and was awarded a research fellowship at Wolfson College, Oxford. He is a Professor at the Centre for British Comparative Cultural Studies at the University of Warwick in Coventry, United Kingdom. He is a member of UNESCO's Executive Board. He is the author of four novels, three collections of poetry and several works of non-fiction and criticism. His first book, Slave Song (1984), a collection of poetry, won the Commonwealth Poetry Prize and the Quiller-Couch Prize.

Non fiction
Hogarth's Blacks (1985)
India in the Caribbean (1987)
Hogarth, Walpole and Commercial Britain (1987)
A Reader's Guide to West Indian and Black British Literature (1987)
Hogarth and Walpoleian England (1988)
A Handbook for Teaching Caribbean Literature (1988)
Windrush Commemoration (1998)
The USA in South America and Other Essays (1998)
The Oxford Companion to Black British History (2010) (with John Gilmore and Cecily Jones)
The Other Windrush (2021) (with Maria del Pilar Kaladeen)