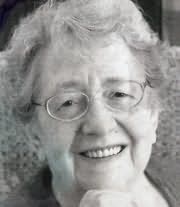 Scotland (1922 - 2012)
Doris Davidson was born in Aberdeen, the daughter of a master butcher and country lass. Her idyllic childhood was shattered in 1934 with the death of her father, after which, in order to make ends meet, her mother was forced to take in lodgers. In part due to her father's sudden death, Doris left school at fifteen and went to work in an office, gradually rising through the ranks until she became book-keeper. Her life took the first of two major changes in direction at the age of 41, when she went back to college to study for O and A levels, followed by three years at Teacher Training College. In 1967 she became a primary school teacher, and subsequently taught in schools in Aberdeen until she retired in 1982. Not content with a quiet retirement Doris embarked on a new 'career' and became a writer, publishing her first work in 1990. Thirteen novels, one collection of short stories and an acclaimed autobiography - A Gift from the Gallowgate - later she was firmly established as one of the country's best-loved romantic novelists. Doris died in June 2012.
Novels
Brow of the Gallowgate (1990)
The Road to Rowanbrae (1991)
Time Shall Reap (1993)
Waters of the Heart (1994)
The Three Kings (1996)
The Girl with the Creel (1997)
House of Lyall (2000)
The Back of Beyond (2002)
The Shadow of the Sycamores (2004)
Cousins at War (2005)
Jam and Jeopardy (2006)
Monday Girl (2007)
The Nickum (2008)

Collections
Duplicity and Other Stories (2009)

Non fiction
A Gift from the Gallowgate (2004)