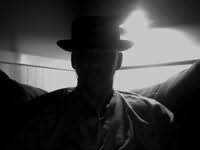 Tom was born and raised in Malden, Massachusetts, not far from the historic (and spooky) town of Salem. He has endured a career as an IT professional, but his dream has always been to be a writer.

A passionate Red Sox fan, Tom and a friend created Surviving Grady at the start of the 2004 season. Ten years and three World Series championships later, he still blogs about the Sox.

Tom has a Masters Degree in English and Creative Writing from Southern New Hampshire University, and is a member of both the Horror Writers Association and the New England Horror Writers.