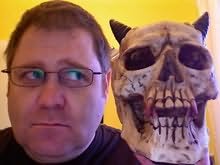 (b.1967)
Tommy Donbavand was born and brought up in Liverpool, but supports Everton. When he was 9 years old his parents moved to Leyland in Lancashire and, because they didn't trust him to forward their post, he had to go with them.

Throughout school, Tommy had a strong interest in drama and writing; he appeared in many amateur productions including The Winslow Boy, Our Town and The Card. At college, Tommy continued to train as a straight actor and began to write new shows for his fellow thespians to perform. All this serious acting paid off and, upon leaving college he immediately became a clown called Wobblebottom and toured the country entertaining children.

In 2006, the writing finally took over and Tommy set himself up as a full-time author, writing five titles in Egmont Books' Too Ghoul For School series: Terror In Cubicle Four, Silent But Deadly, School Spooks Day, Attack Of The Zombie Nits and A Fete Worse Than Death. He was also proud to become the writer-in-residence at Seven Stories, the centre for children's books in Newcastle.

Tommy signed the contract for Scream Street with Walker Books in 2007, and the series was quickly doubled from six books to 12. The first 4 titles - Fang of the Vampire, Blood of the Witch, Heart of the Mummy and Flesh of the Zombie - will be published in October 2008.

Tommy still lives in the north east with his family and is hard at work on more Scream Street stories, an educational book called Making A Drama Out Of A Crisis, a novel for struggling readers and a couple of projects that are so top secret that even he doesn't have all the details. He has started to see sleep as a waste of good writing time...

Series contributed to
EDGE: A Rivets Short Story
7. My Teacher Ate My Brain (2012)