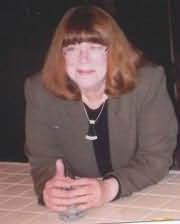 Rose is the author of many fantasy and science fiction books, including full length novels and multiple choice game books. After contributing extensively to TSR's Dungeons and Dragons Endless Quest series (of which she wrote the first six, as well as others later down the line), she wrote her first full length novel, Children of the Dragon (1985).
She continued to write for TSR by writing six volumes in a series of Grey hawk novels. She contributed to other series, but continued to write books and start series of her own that, like Children of the Dragon, take place in a fantasy or science fiction world created by her own imagination. Rose Estes began reading at the age of two, and as a child she was already imagining fantastic places. Before becoming a writer, she "put in time as a hippie, a student, a newspaper reporter, and an advertising copy writer" (Estes, Children of the Dragon, Random House 1985, from the about the author, page 207 -208). She has traveled extensively throughout the Americas. She has three children.