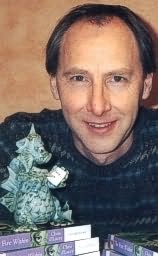 (b.1954)
Born in Malta, Chris d'LaceyBorn in Malta, Chris d'Lacey is a well known English author. He is known for his numerous contributions to children's fiction - in particular, his first novel Fly, Cherokee, Fly, was highly commended for the 1999 Carnegie Medal. However Chris is probably better known for his popular series The Last Dragon Chronicles, which follows the adventures of David Rain and his quests to save the tear of the last dragon, Gawain, and protect dragonkind. His favourite book of the series is The Fire Within, which he originally began as a surprise present for his wife Jay fifteen years before it was published!

He has lived most of his life in Leicester, England. Chris worked as a research technician at Leicester University for 28 years and in 2002 was awarded a doctorate by them for his services to children's fiction. He now writes full time.