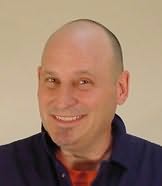 (b.1954)
Jon Scieszka (Pronunciation: Shess Ka) was born in Flint, Michigan. The Stinky Cheese Man was named an Honor Book in the 1993 Randolph Caldecott Medal awards, given by the American Library Association. It was also named an ALA Notable Book of the Year, and a 1992 Best Illustrated Book of the Year by The New York Times. The True Story of the Three Little Pigs won the Silver Medal from the New York Society of Illustrators. The Book That Jack Wrote and Math Curse were named Book-of-the-Month Club selections, as were three of the Time Warp Trio books.