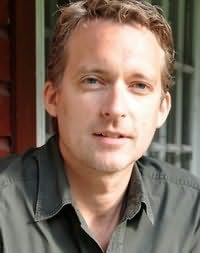 (b.1971)
Justin Evans is a digital media executive based in New York City where he lives with his family.  He received a BA in English from Columbia University and a MBA in Finance from NYU Stern. His first novel, A Good and Happy Child, was named a Best Book of 2007 by the Washington Post, was translated into six languages, and optioned by a major film studio. Justin attended Harrow School for one year at the end of the eighties.