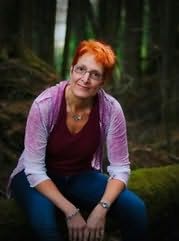 (b.1957)
Ilsa J. Bick is a child psychiatrist, as well as a film scholar, surgeon wannabe, former Air Force major--and an award-winning, best-selling author of dozens of short stories and novels.
Ilsa's work spans established universes such as Star Trek, Battletech, Battlecorps, Mechwarrior Dark Age, and Shadowrun while her original novels include such critically acclaimed and award-winning books as The ASHES Trilogy, Drowning Instinct, The Sin-Eater's Confession, and Draw the Dark. The first novel in her DARK PASSAGES series, White Space, was long-listed for the Stoker, and the concluding volume of the series, The Dickens Mirror, is now out in paperback.

Currently a cheesehead-in-exile, Ilsa lives in Alabama with the husband and several furry creatures. On occasion, she even feeds them.