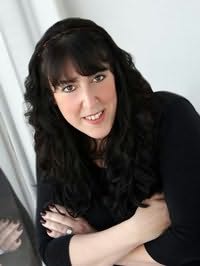 (b.1970)
Simone Elkeles was born and raised in the suburbs of Chicago, where she still lives today. Simone went to the University of Illinois in Urbana-Champaign and received her Bachelors of Science there in Psychology in 1992. She continued her education at Loyola University-Chicago where she received her Masters of Science degree in Industrial Relations while working for a manufacturing company creating diversity programs for their employees.

She loves animals (she has two dogs - a labradoodle and a German Shepherd), kids (she also has two of those) and her family. In her spare time she's the Hockey Mom for her kids hockey teams and is an active Girl Scout leader specially trained in outdoor education. She also spends time mentoring other teen and adult authors. (She also loves sushi, which you can probably tell by reading her books.) Simone writes about teens because she was a teen in the 80s (when spiked hair and blue eye shadow were rad) and she loves writing about those exciting teen relationships and romances.

My Own Worst Frenemy (2011)
(Langdon Prep, book 1)
Kimberly Reid
"Watch out Nancy Drew... Chanti Evans from the 'hood is the hot new sleuth in town! Kimberly Reid's debut is full of fun, mystery, and attitude."