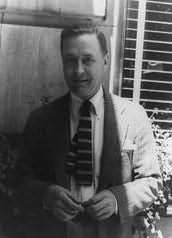 (1896 - 1940)
Francis Scott Key Fitzgerald was an American writer of novels and short stories, whose works are evocative of the Jazz Age, a term he coined himself. He is widely regarded as one of the twentieth century's great writers. Fitzgerald is considered a member of the "Lost Generation". He finished four novels, left a fifth unfinished, and wrote dozens of short stories that treat themes of youth and promise (his first act), and despair and age (act two: Fitzgerald is also famous for the phrase, "There are no second acts in American lives").