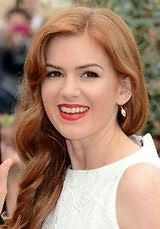 Australia (b.1976)
Isla Fisher began acting as a child and has worked in television and film for the past 25 years. She has appeared in Confessions of a Shopaholic, Home and Away, The Great Gatsby and Definitely Maybe, to name a few, and has three films coming out in 2016. (She also studied in Paris to become a clown for two years before realising that there is not much call for miming the wall!) PS. She is also Mrs Ali G