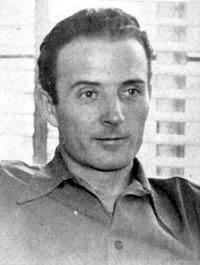 aka Stephen Gould
Born in in Marine City, Illinois, Fisher was thirteen when he sold his first story to a magazine. At sixteen he joined the Marines. He was still in the service when he began to publish stories and articles in US Navy and Our Navy. Discharged from the Marines in Los Angeles in 1932, Fisher stayed in L.A., where he continued to write for US Navy, for which he was paid one cent a word. He was also, by this time, writing for a number of sex magazines.

In 1934 he moved to New York where, despite near destitution, he continued to pursue a career as a writer, and met, for the first time, his friend Frank Gruber.

Prior to his arrival in New York, Fisher had corresponded with Gruber, but the two had never met. It was in the Manhattan office of Ed Bodin, an agent who represented both authors, that the writers finally crossed paths.

They, of course, hit it off immediately, and left Bodins office on Fifth Avenue just below 23rd Street, on their way to Greenwich Village where, in Washington Square Park, they talked for three hours about their hopes, ambitions and their writing.