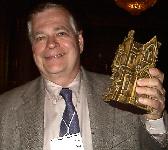 aka Steve Brackeen
John Farris published his first suspense novel, When Michael Calls, in 1967 after already establishing himself as a mainstream popular fiction writer with works such as King Windom (1967) and Harrison High. The Fury, published in 1976 and later made into a movie directed by Brian de Palma, was a synthesis of horror and contemporary realism that epitomized the horror boom of the 1970s.