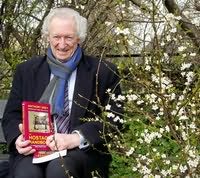 (b.1938)
Anthony Grey, is now best known for his international best selling novels SAIGON, PEKING and TOKYO BAY
However he attracted worldwide headlines for the first time in the late 1960s at the age of 29 -- through no fault or merit of his own -- when he was taken hostage by Mao Tse-tung's Red Guards at the height of the chaotic Cultural Revolution, in which three million people are believed to have died.  He thus became arguably the first international hostage of the modern era.  Correspondent for Reuters news agency and the only British journalist accredited to China at the time, he was held for two harsh years in solitary confinement in slogan-daubed rooms of a house beside the moated Forbidden City of China's emperors.  This was in retaliation for the imprisonment by the British authorities in Hong Kong of Chinese Communist newsmen arrested in rioting.  After his release he was awarded the O.B.E for services to journalism and made UK Journalist of the Year in the annual IPC awards.
Novels
Some Put Their Trust in Chariots (1973)
Crosswords from Peking (1975)
The Bulgarian Exclusive (1976)
The Chinese Assassin (1979)
Saigon (1982)
A Gallery of Nudes (1987)
Peking (1988)
The German Stratagem (1990)
The Bangkok Secret (1990)
The Naked Angels (1990)
Tokyo Bay (1996)
The Jersey Stratagem (2013)