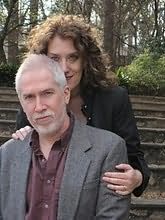 (b.1960)
Clay and Susan Griffith are a married couple who have written and published together for more than a decade. Their credits not only include two novels for Bantam Doubleday Dell in the mid-1990s and another novel for Pinnacle Entertainment Group in 2002 but also numerous short stories published in many anthologies, some featuring noted genre characters like Kolchak the Night Stalker and The Phantom. They've also written scripts for television and published graphic novels. The authors have attended many cons multiple times over the years, including World Fantasy, WorldCon Science Fiction, ComicCon (San Diego), DragonCon (Atlanta), HeroesCon (Charlotte), and other smaller conventions. They are committed to doing every con they can find for Vampire Empire.

Series contributed to
Arrow (with Susan Griffith)
2. Generation of Vipers (2017)