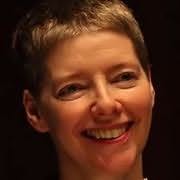 (b.1960)
Nicola Griffith is a native of Yorkshire, England, where she earned her beer money teaching women’s self-defense, fronting a band, and arm-wrestling in bars, before discovering writing and moving to the US. Her immigration case was a fight and ended up making new law: the State Department declared it to be “in the National Interest” for her to live and work in this country. This didn’t thrill the more conservative power-brokers, and she ended up on the front page of the Wall Street Journal, where her case was used as an example of the country’s declining moral standards.

In 1993 a diagnosis of multiple sclerosis slowed her down a bit, and she concentrated on writing.

Nicola, now a dual US/UK citizen, holds a PhD in Creative Writing from Anglia Ruskin University, is married to writer Kelley Eskridge, and lives in Seattle. Most of the time she is happily lost in the seventh century (writing the second novel about Hild, Menewood), emerging occasionally to drink just the right amount of beer and take enormous delight in everything.

Passing Strange (2017)
Ellen Klages
"Ellen Klages's love for queer San Francisco is evident in every line: its history, its mystery, and its people in all their variety and glory. I smiled as I read. You will, too."

The Mere Wife (2018)
Maria Dahvana Headley
"The Mere Wife is an astonishing reinterpretation of Beowulf Beowulf in suburbia--epic, operatic, and razor-sharp, a story not of a thick-thewed thegn, but of women at war, as wives and warriors, mothers and matriarchs. Their chosen weapons are as likely to be swords as public relations, and they wield both fearlessly. They rule, and they fight."

The Best Bad Things (2018)
Katrina Carrasco
"Gritty street fiction set in the lawless past when Port Townsend was the Deadwood of the Pacific Northwest, Katrina Carrasco's The Best Bad Things is a bloody brawl of a book. Carrasco uses a whippy structure and flexible prose to play an unsettling shell game as Alma, dressed as Jack, sheds her impulse control along with her corsets, and the plot accelerates into a visceral, unexpected underworld of bare-knuckle fighting, opium smuggling, and genderqueer lust."

Miranda in Milan (2019)
Katharine Duckett
"Love and lust, mothers and monsters, magicians and masked balls, all delivered with Shakespearean panache."

The Parting Glass (2019)
Gina Marie Guadagnino
"Read The Parting Glass for its rich tapestry of 1830s lower Manhattan, where the stately drawing rooms of wealthy WASPs on Washington Square are sustained by the cheap labour drawn from the tenements nearby. Or read it as a fascinating study of immigration and social class, race and ethnicity, religion and sexuality in early New York. Or as the tale of Maire O'Farrell and her twin brother Seanin, fresh off the boat, who help each other lie to get work in a wealthy household—until they both fall in love with the daughter of the house. Or read it as a tragedy of lies and a triumph of love, or a delicious subversion of the marriage plot. But read it."