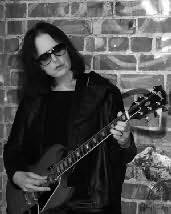 (b.1954)
Deborah Grabien can claim a long personal acquaintance with the fleshpots -- and quiet little towns -- of Europe. She has lived and worked and hung out, from London to Geneva to Paris to Florence, and a few stops in between.

But home is where the heart is. Since her first look at the Bay Area, as a teenager during the peak of the City's Haight-Ashbury years, she's always come home to San Francisco, and in 1981, after spending some years in Europe, she came back to Northern California to stay.

Born in 1954, Deborah was deeply involved in the Bay Area music scene, from the end of the Haight-Ashbury heyday until the mid-1970s. Most of her friends have been trying to get her to write about those years - fictionalised, of course! - and, now that she's comfortable with it, she's doing just that. After publishing four novels between 1989 and 1993, she took a decade away from writing, to really learn how to cook. That done, she picked up where she'd left off, with the five novels of her Haunted Ballads series being brought out by St. Martins Minotaur between 2003 and 2007.