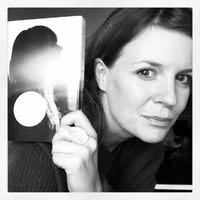 Emily Gale currently lives in Melbourne with her partner, children and cats - two of each. Well, two children and two cats but just the one long-suffering partner. Before that she was a freelance writer in London, publishing a fictional magazine column and several picture books including Doctor Pig and the Just Josie series. This was not long after she gave birth extremely loudly on the living room floor, and then wandered about in a daze for months wondering how on earth other women did this. In the phase before that she was slightly more glamorous - well, she wore heels and had time to do her make-up, at least - working as an editor, mainly of childrens books, including a period that she refers to very mysteriously as the Peter Rabbit Years. That time was preceded by her reading English at the University of Sussex and getting a taste for editing by working on student magazines. She also got a taste for taking a midnight dip in the English Channel. Pre-uni she was a bit of a groupie who was always falling in love with guitar-playing, long-haired boys. As a school-girl in lurid purple uniform she studied hard by day and wrote toe-curlingly bad poetry by night, which is now safely buried in a locked box on a tiny archipelago in the southern Indian Ocean. Her toddler years are marked by the nickname Kojak, because she didnt have any hair. She did have a temper, though, and didnt speak to her mother for two whole weeks when her baby brother was brought home from the hospital. And before any of this happened she was born on a snowy day in London, in 1975, and the possibilities were endless.

Ballad for a Mad Girl (2017)
Vikki Wakefield
"There’s a dark side to being the funny one in the group. This is a piercing, creepy tale about a wild girl who could lose herself to a ghost. Vikki Wakefield’s writing never fails to give me chills."

It Sounded Better in My Head (2019)
Nina Kenwood
"An adorably awkward and real romance. It was love at first chapter for me."