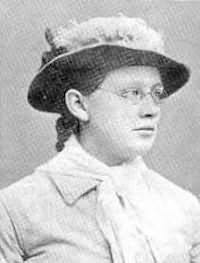 (1900 - 1991)
Eve Garnett (1900-1991) was born in Worcestershire and educated at a convent in Devon. She moved to London in the 1920s to study art at Chelsea and later at the Royal Academy where she won prizes and a Silver Medal for her landscape painting. Eve came from a middle class family and, when asked to illustrate a book called The London Child, she was shocked to see the terrible living conditions of Londons poor. She was determined to bring attention to this and so wrote her most famous book The Family from One End Street, based on her experiences in London. Many publishers turned it down considering it unsuitable for children most successful books for children at that time involved middle-class families and/or talking animals (Winnie the Pooh, Swallows and Amazons, etc.).

Not everyone agreed with the praise heaped on this book; some found it patronising and unacceptable the book continues to be read and the arguments about it go on.

Eve Garnett lived in Lewes, Sussex for the last half of her life. She published more books but her greatest interest was in painting and she had several London exhibitions.

Anthologies edited
A Book of the Seasons (1952)