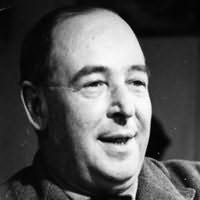 aka N W Clerk, Clive Hamilton
C.S. Lewis was an author, essayist and Christian apologist. He is best known for his childrens classic series The Chronicles of Narnia.

Clive Staples Lewis was born on 29 November 1898 and lived until 22 November 1963. He was born in Belfast, North Ireland into a protestant Ulster family. Throughout his life he retained strong roots to Ireland. He sought out the company of the Irish took an active interest in Celtic literature and myths. He was a keen admirer of the works of W.B.Yeats, at a time when he was relatively unknown in England.

C.S.Lewis died a few years later in 1963 from renal failure. His death occurred on same date as the assassination of J.F. Kennedy.

Since his death, his books and influence have continued to grow. He has been rated as one of the top English writers of all time and his books have been translated into numerous languages.

Books about C S Lewis
Henry Treece, C.S.Lewis and Beatrix Potter (1969) by Marcus Crouch, Margery Fisher and Roger Lancelyn Green
Lord Of The Elves and Eldils (1974) by Richard Purtill
The Inklings (1978) by Humphrey Carpenter
C S Lewis' Case for the Christian Faith (1981) by Richard Purtill
The Riddle of Joy (1989) by Michael H MacDonald
C.S. Lewis (1990) by A N Wilson
The Scientifiction Novels of C.S. Lewis (2004) by Jared Lobdell
C. S. Lewis (2004) by Michael White
Inside Narnia (2005) by Devin Brown
The Lion, the Witch and the Wardrobe (2005) by Perry Moore
The World According to Narnia (2005) by Jonathan Rogers
Into the Wardrobe (2008) by David C Downing
Inside Prince Caspian (2008) by Devin Brown
Through the Wardrobe (2008) by Herbie Brennan
Inside the Voyage of the Dawn Treader (2010) by Devin Brown

Phantastes (1853)
George MacDonald
"[His writing] hovers between the allegroical and the mythopoeic."

The Wood Beyond the World (1894)
William Morris
"No mountains in literature are as far away as the distant mountains of Morris."

The Worm Ouroboros (1922)
E R Eddison
"It is very rarely that a middle-aged man finds an author who gives him the sense of having opened a door on wonder. One had thought those days were past. Eddison's heroic romances disproved it. In a word, his books are works, first and foremost, of art."