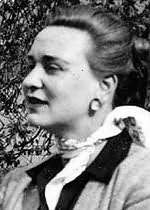 (1917 - 1983)
Maeve was born in 1917 and was brought up in Brixton, South London, where her father practised as a doctor of medicine. She was educated at a convent boarding school in Sussex, now St Leonards-Mayfield School, and later attended a finishing school in Switzerland where she learnt to speak German and French, and became a good pianist (she particularly enjoyed the music of Johann Sebastian Bach). She was the wife and biographer of the author Mervyn Peake, whose father was likewise a doctor. They met at the Westminster School of Art, where she was a student, in 1936 and married in 1937. They had three children named Sebastian, Fabian, and Clare. An accomplished painter and sculptor, she also wrote several short stories. However, when Peake became ill, she put her career on hold in order to care for him. Her memoir A World Away (1970) was written in the years immediately following Peake’s death, and movingly depicts their life together.

Non fiction
Exhibition of Manuscripts, Drawings, Illustrations (1978)
Child of Bliss (1989) (with Sebastian Peake)
A World Away (1992)