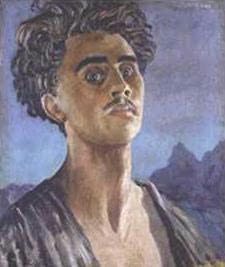 (1911 - 1968)
Mervyn Peake's masterpiece, the Gormenghast trilogy, is a gothic fantasy whose strange characters' lives are dominated by the labyrinthine castle of Gormenghast and its ancient rituals. Peake was also a brilliant artist which perhaps accounts for the unique visual intensity of his creation.

Mervyn Peake was born in China in 1911 of medical missionary parents. He began to draw, paint and write stories at an early age. His first book of poems, Shapes and Sounds, was published in 1941. He is probably best known for his Titus novels - Titus Groan, Gormenghast and Titus Alone - but other well-known poetry collections include: The Glassblowers and The Rhyme of the Flying Bomb. He married Maeve Gilmore in 1937. He was awarded the W.H. Heinemann Foundation Prize by the Royal Society of Literature in 1950. Mervyn Peake died after a long illness in 1968.