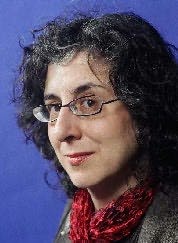 (b.1955)
Ellen Kushner is an American writer of fantasy novels, and the host of the radio program Sound & Spirit, produced by WGBH in Boston and distributed by Public Radio International.

Kushner was born in Washington, DC and grew up in Cleveland, Ohio. She lives in New York City with her wife and sometime collaborator.

Trash Sex Magic (2004)
Jennifer Stevenson
"Ambitious, phantasmagorical, with images that burn into your brain and stay there."

The Magicians and Mrs. Quent (2008)
(Mrs. Quent, book 1)
Galen Beckett
"I loved reading this piquant page-turner of a retro-modernist fantasy novel. But it's more than just a rattling good time. Like its characters, it is not merely devastatingly clever, but has a heart and a soul."

Wylding Hall (2015)
Elizabeth Hand
"By turns comic, elegiac, sexy, romantic, melancholy, and downright chilling, Wylding Hall sweeps us along from swinging London to the terrifying gates of Faerie and into the present—where all spells must be paid for."