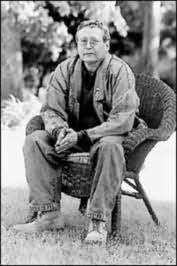 (1942 - 2010)
Barry Hannah was an American novelist and short story writer from Mississippi. He was the author of eight novels and five short story collections. He worked with notable American editors and publishers such as Gordon Lish, Seymour Lawrence, and Morgan Entrekin. His work was published in Esquire, The New Yorker, The Oxford American, The Southern Review, and a host of American magazines and quarterlies. In his lifetime he was awarded the The Faulkner Prize (1972), The Bellaman Foundation Award in Fiction, The Arnold Gingrich Short Fiction Award, the PEN/Malamud Award (2003) and the Award for Literature from the American Academy of Arts and Letters. He was director of the MFA program at the University of Mississippi, in Oxford, where he taught creative writing for 28 years. He died on March 1, 2010, of natural causes.
Novels
Geronimo Rex (1972)
Nightwatchmen (1973)
Ray (1980)
The Tennis Handsome (1983)
Hey Jack! (1987)
Boomerang (1988)
Never Die (1991)
Yonder Stands Your Orphan (2001)

Life At These Speeds (2002)
Jeremy Jackson
"I love the physicality of this novel and its pace, which are true to the agony and ecstacy we might all live as athletes of the mind and body."
Visitors to this page also looked at these authors
Adam Hardy
Larry McMurtry
Simon Harding
Lyndon Hardy
Harold Coyle
Bernard Cornwell
David Robbins
William Safire
Louis L'Amour
John Harvey
Cameron Dokey
William W Johnstone
Gwen Hansen
William C Dietz
Catrin Collier
Lee Harding