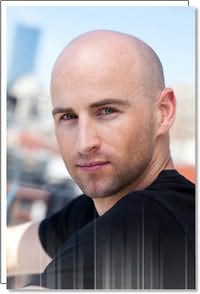 aka Pittacus Lore
obie Hughes was born in Renton, Washington, a suburb of Seattle, but raised from the age of three in the quaint and mostly blue-collar town of Spencer, Ohio, population 747, which lies forty miles southwest of Cleveland.  He was a high school state champion in wrestling, attended Ohio University on an athletic scholarship, and graduated with a business degree in Management Information Systems, a major he had little interest in and one chosen for no other reason than, at age 20, he hadn't the slightest idea of what he wanted to do.  What followed were five wayward years earning minimal pay working shitty jobs, several of which he was fired from.  He started writing when he was 24 and, at age 27, left capitalism behind and moved to New York City to attend Columbia Universitys School of the Arts.  He graduated in May 2009 with an MFA in Creative Writing (fiction). Hughes is the coauthor of two previous novels, both of which were #1 New York Times Best Sellers and have sold over five million copies worldwide.  His work has been translated into 27 languages and published in 49 countries. He lives in Newmarket, New Hampshire.