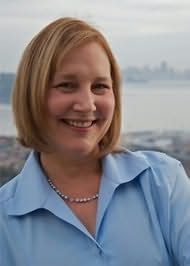 aka K A Applegate, L E Blair
Katherine Applegate was born in Michigan in 1956. Since then she has lived in Texas, Florida, California, Minnesota, Illinois, North Carolina, and after living in Pelago, Italy for a year, she has moved back to Southern California. She has a son named Jake Mates, although she says the Animorph leader is not named after him. In 2003 she and her husband, Michael Grant, her co-author on many projects including Animorphs, adopted their daughter, Julia, in China. Following the end of Animorphs, Applegate took three years off. She is back at work and has written a picture book called "The Buffalo Storm," a middle reader novel called "Home of the Brave," and an early chapters series "Roscoe Riley Rules" with Harper Collins. Her book "Home of the Brave" has won the SCBWI Golden Kite Award, the Bank Street 2008 Josette Frank Award, and is a Judy Lopez Memorial Award honor book.

Omnibus
See You in September (1995) (with Ellen Conford, Alane Ferguson and Lee Wardlaw)

Eventown (2019)
Corey Ann Haydu
"Tender, wise, and heartbreakingly lovely, this story is as brilliant as a stolen star, and every bit as magical. Prepare to be enchanted."

Song for a Whale (2019)
Lynne Kelly
"At its luminous heart, Song for a Whale is a tale about longing for connection and finding it in the most magical and unexpected of places. Fascinating, brave and tender, this is a story like no other about a song like no other. A triumph."

All the Impossible Things (2019)
Lindsay Lackey
"Wise and wondrous, this is truly a novel to cherish."