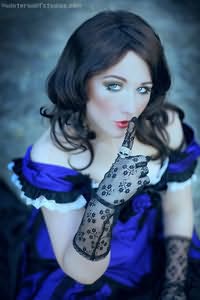 (b.1982)
ia Habel was born in Jamestown, NY – as far as it’s physically possible to get from New York City and still be in the same state, and official spooky abandoned farmhouse territory. As an only child of good geek stock (her mother still attends San Diego Comic-Con yearly, and her father is still an early tech adopter), young Lia was lovingly reared on horror movies, video games, and Victorian novels. She developed an affection for horror movie monsters early on, often challenging her weary mother with lists of reasons why Jason Voorhees might yet be saved or excuses for Darkman’s cackling insanity. As she grew older and her natural sympathy extended to ever more serial killers, swamp monsters, sentient fanged beasts, and reanimated gents, her mother began to worry what her daughter might one day bring home.Miss Habel currently still lives in Jamestown, with three former alley cats and far too many Victorian ball gowns. She enjoys attending anachronistic and steampunk events, watching zombie movies (her goal is to watch every zombie movie ever made), and collecting Victorian and Edwardian books. She still hopes one day to run into the beautiful monster of her dreams, but would settle for the reincarnation of Vincent Price.