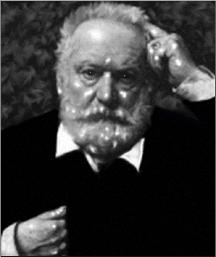 (Victor-Marie Hugo)
France (1802 - 1885)
The third son of an army major, Victor-Marie Hugo, poet, novelist, dramatist, and the central figure in the French Romantic movement, was born in Besançon in 1802. Raised as a Catholic and a Royalist, the young Hugo travelled with his father to Italy and Spain. He achieved literary success early on with his Odes of 1822, the year of his marriage to Adèle Foucher. Their marriage later dissolved with her affair with the novelist and critic, Charles-Augustin Sainte-Beuve, Hugo beginning a relationship with Juliette Drouet (which was to last until her death in 1883). Hugo was a master of poetry, and his diction, versification, and subject matter (including spiritualism, occultism, and notions of a cosmic framework) were highly innovative, with his preface to Les Orientales (1829) advocating a complete freedom of inspiration for poetry. Another preface, to his 1827 play, Cromwell, served to embody the ideals of the French Romantics. Hugo's novels - most famously Notre-Dame de Paris (1831) and Les Misérables (1862) - are dominated by a sense both of fatality and social conscience.In 1841, Hugo was elected to the Académie Française, but, after denouncing Louis-Napoleon Bonaparte's' coup d'état of December 1851, he lived in exile in Jersey until 1855, and then in Guernsey until 1870. Thereafter he lived in Paris. From 1876, he took little part in public life, and, on his death in 1885, he was mourned as a national hero and buried in the Panthéon.