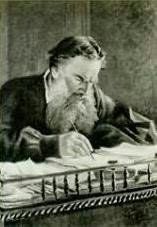 (Lev Nikolayevich, Count Tolstoy)
Russia (1828 - 1910)
Leo Tolstoy was a Russian author, a master of realistic fiction and one of the world's greatest novelists. Tolstoy is best known for his two longest works, War and Peace and Anna Karenina, which are commonly regarded as among the finest novels ever written. War and Peace in particular seems virtually to define this form for many readers and critics. Among Tolstoy's shorter works, The Death of Ivan Ilyich is usually classed among the best examples of the novella. Especially during his last three decades Tolstoy also achieved world renown as a moral and religious teacher. His doctrine of nonresistance to evil had an important influence on Gandhi.

Books about Leo Tolstoy
Tolstoy or Dostoevsky? (1960) by George Steiner
The Lion and the Honeycomb (1987) by A N Wilson