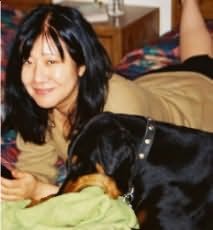 (b.1957)
Cynthia Kadohata has lived in Chicago, Georgia, Arkansas, Michigan, Los Angeles, Boston, Pittsburgh, and New York City. She has worked as a waitress, sales clerk, typist, publicist, and secretary. She's back to Los Angeles now, probably permanently, and lives with George, her boyfriend of fifteen years; Sammy, her much-loved son; and two very funny and probably insane dogs. She has published three novels for grown-ups, and her writing has appeared in Grand Street, the Mississippi Review, The New Yorker, and Ploughshares. Her first children's novel, Kira-Kira, won the Newbery Medal in 2005. She has also published the children's books Weedflower, winner of the Pen-USA; Cracker, winner of six state awards as voted on by kids; Outside Beauty; A Million Shades of Gray; and The Thing About Luck, winner of the 2013 National Book Award. Her next novel is Half a World Away, due out September 2, 2014. Half a World Away is the tale of a troubled young boy who was adopted from Romania at age eight and whose parents are adopting a baby from Kazakhstan.