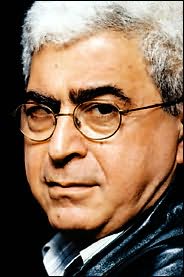 Lebanon (b.1948)
Elias Khoury is a Lebanese novelist, playwright and critic. He has published ten novels, which have been translated into several foreign languages, as well as several works of literary criticism. He has also written three plays. He currently serves as editor of Al-Mulhaq, the weekly cultural supplement of the Lebanese daily newspaper Al-Nahar, and is a prominent public intellectual.

Genres: General Fiction
Series
Children of the Ghetto
1. My Name is Adam (2018)