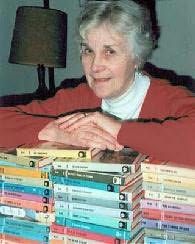 (1926 - 2008)
Flora was born in 1926 in Liverpool, England. The youngest of four children,Flora and her family lived in the same house until she was a teen. In 1949,she graduated from Liverpool University, where she met Robert Kidd, herhusband. They moved to Scotland, where she began teaching and raised their children.

Flora published her first novel, Visit To Rowanbank, in 1966. From thisfirst sale to Mills and Boon, she continued her romance career until 1989.After retiring, she moved to Saint John, New Brunswick, Canada in 1997.