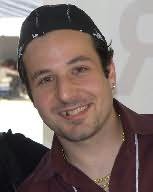 Rob Kidd is the great-great-great-great-great grandson of the notorious piratess Trixie Delaney, who famously sailed with the Pirate Lord Jack Sparrow. The tales that Kidd scribes have been passed down through generations, mostly through word of mouth. He does, however, occasionally dip into an moldy old pouch, which belonged to Grandma Trixie, containing pirate charms that allow him to communicate with long-dead pirates, including said Captain Sparrow. He lives on a very large island in southern New York State, but spends most of his time at sea aboard his yacht, the Scurvy Mutt.