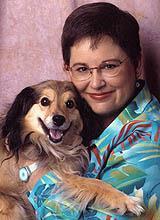 Trained as an artist with a BFA in Illustration from the California College of Arts and Crafts, Susan Krinard became a writer when a friend read a short story she'd written and suggested she try writing a romance novel. A long-time reader of science fiction and fantasy, Susan began reading romance -- and realized what she wanted to do was combine the two genres. Prince of Wolves, her first romance novel, was the result. Within a year Susan had sold the manuscript to Bantam in 1993 as part of a three book contract, and the novel went on to make several bestseller lists. Since then, she's written three other contemporary paranormal romance novels including Body and Soul, a "futuristic," three novellas (including "Kinsman" in the New York Times Bestseller Out of This World), a time-travel romance, and three historical paranormal romances, Touch of the Wolf, Once a Wolf, and Secret of the Wolf.

Susan now makes her home in New Mexico, the "Land of Enchantment," with her husband Serge, her dogs Brownie, Freya and Nahla, and her cats Murphy and Jefferson. In addition to writing, Susan's interests include music (New Age and Classical), old movies, reading, nature, animals, baking and collecting jewelry and clothing with leaf and wolf designs.

Agent of Change (1988)
(Liaden Universe, book 9)
Sharon Lee and Steve Miller
"Val Con and Miri are the most romantic couple in SF!"

Night Embrace (2003)
(Dark-Hunter, book 4)
Sherrilyn Kenyon
"By turns funny and touching...you will laugh out loud. The gods haven't been this much fun since Xena!"