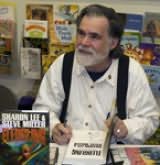 (b.1950)
Husband of Sharon Lee
Steve Miller was born in Baltimore, Maryland in 1950. He graduated high school in 1968, attended University of Maryland Baltimore County a couple times, where he was news editor of the campus newspaper, The Retriever, active in the chess club and founding president of the Infinity Circle, the school's first science fiction club. In between bouts of being a student, he was curator of the Albin O. Kuhn Library's science fiction collection.

In no particular order he has been a reviewer-of music, of books and of typewriters-a reporter, an editor, a professional chess tournament director, a librarian, an editor, a sysop, an editor and a resource specialist for a statewide electronic bulletin board system.

In 1973 he attended the Clarion West Writing Workshop in Seattle.

Since his first publication in 1968, Steve has accumulated credits in well over 100 newspapers, magazines and journals. In addition to reviews and poetry, Steve's professional output has included short stories, TV and radio commercials, greeting cards, as well as his contribution to the Liaden Universe.

He and Sharon Lee married in 1980. In 1988 they migrated to Maine, where they can be found to this day, sharing life with four stalwart cats and a large cast of characters.