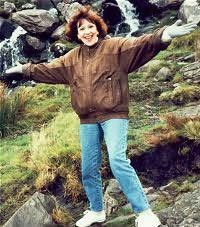 An oft-invited guest of writers' organizations, colleges and universities, corporate and government agencies in the U.S. and abroad, Loree loves sharing learned-the-hard-way lessons about the craft and the industry.

Once upon a time, Loree (literally) sang for her supper, performing alone and "opening" for the likes of Tom Jones, Dottie West, The Gatlin Brothers, and more. Though she refuses to share the actual year when she traded her Yamaha 6-string for a wedding ring, she IS willing to admit that, every now and then, she blows the dust off her six-string to croon a tune or two. But mostly, she just writes (and writes).

Loree and her husband split their time between a home in the Baltimore suburbs and a cabin in the Allegheny Mountains, where she continues to hone her "identify the critter tracks" skills. Her favorite passtime? Spending long, leisurely hours with her grandchildren...all seven of them!

She loves hearing from her readers, and answers every letter, personally.

Always the Designer, Never the Bride (2012)
(Tanglewood, book 3)
Sandra D Bricker
"Sandra Bricker has done it again! Like every book in this series, Always the Designer, Never the Bride made me laugh, made me sigh, made me root for the heroine, and made me cry. When I reached the last page, I didn't know whether to whimper because I had to leave Audrey and J.R. behind... or exhale that sigh of satisfaction born of reading a truly wonderful story. No way I'm loaning this one out, because - gasp - what if it isn't returned!"