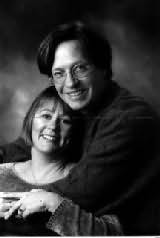 A pseudonym used by Jahnna Beecham, Malcolm Hillgartner
ahnna N. Malcolm is the pen name of American authors Jahnna Beecham and Malcolm HIllgartner. They have written more than 130 published books for children and young adults, with sales of more than 8 million. Their book series, The Jewel Kingdom was published by Scholastic in 1997. Their parenting book, I'm Counting to 10, a compilation of humorous columns they wrote for Sesame Street Parents magazine, received a Parent's Choice Silver Award for 2001.
Their musical Chaps! (Samuel French) has played at over 30 regional theatres around the US. Other musicals include They Came From Way Out There (premiere Oregon Cabaret Theatre, 2004) and Dogpark: The Musical (Samuel French, 2010). Their latest musical, Holmes and Watson Save the Empire, premiered at the Milwaukee Rep in October 2009.
Malcolm and Jahnna continue to work in the theatre as actors, directors and voice talents. Malcolm is an award-winning narrator of more than 60 audiobooks. They met while working as actors for the Oregon Shakespeare Festival and were later married on the set of Twelfth Night at the old Empty Space Theatre in Seattle. Their passion for travel has taken them all over the world, from Thailand to Kenya. Their most recent adventure took them to Iceland to attend Elf School.