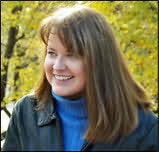 Clare O'Donohue was born in Chicago, Illinois, the youngest of four children. Her parents, John and Sabina O'Donohue, were both born in Ireland. They met in London and moved to the US and settled on Chicago's South Side where she was raised.

She always knew she wanted to be a writer and in fact wrote her first novel when she was 15. It was a mystery. After college she worked as a newspaper reporter and writing teacher before moving to LA and getting her first job in television. That was on the HGTV show, Simply Quilts. she had already been quilting for about five years, which was why the producer hired her, but she really got an education in quilting from that show.