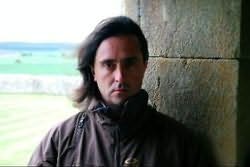 Scotland (b.1967)
Neil Oliver is a Scottish archaeologist, historian, broadcaster and writer who has become widely known as the presenter of BBC television's flagship 10-part series A History of Scotland.

Before that his distinctive style was much in evidence as a charismatic presenter of the award-winning multi-part documentary series Coast and the author of its bestselling tie-in book.

His archaeological training at Glasgow University was put to good use in BBC2's series Two Men in a Trench where he visited historic British battlefields and attempted to recreate the events of each battle. He co-wrote the two accompanying books. He has also appeared as a contributor on The One Show, and as a presenter on The History Detectives, Time Team and Channel 4's The Face of Britain. His Amazing Tales for Making Me Out of Boys is published by Penguin. He lives in Stirling with his wife and three children.
Novels
Master of Shadows (2015)
The Black Glass (2019)