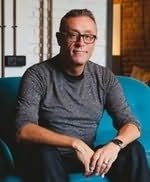 aka Chris Fowler, LK Fox
Christopher Fowler was born in Greenwich, London. He is the multi award-winning author of many novels and short story collections, and the author of the Bryant & May mysteries. His first bestseller was 'Roofworld'. Subsequent novels include 'Spanky', 'Disturbia', 'Psychoville' and 'Calabash'. He spent 25 years working in the film industry.

His collection 'Red Gloves', 25 new stories of unease, marked his first 25 years of writing. His memoir 'Paperboy' won the Green Carnation Award, and was followed by a 2nd volume, 'Film Freak'. Other new novels include the dark comedy-thriller 'Plastic' and the haunted house chiller 'Nyctophobia'.

He has written comedy and drama for BBC radio, including Radio One's first broadcast drama in 2005. He has a weekly column called 'Invisible Ink' in the Independent on Sunday. His graphic novel for DC Comics was the critically acclaimed 'Menz Insana'. His short story 'The Master Builder' became a feature film entitled 'Through The Eyes Of A Killer', starring Tippi Hedren and Marg Helgenberger. Among his awards are the Edge Hill prize 2008 for 'Old Devil Moon', and the Last Laugh prize 2009 for 'The Victoria Vanishes'.

Christopher has achieved several pathetic schoolboy fantasies, releasing a terrible Christmas pop single, becoming a male model, writing a stage show, posing as the villain in a Batman graphic novel, running a night club, appearing in the Pan Books of Horror, and standing in for James Bond.

His short stories have appeared in Best British Mysteries, The Time Out Book Of London Short Stories, The Best Of Dark Terrors, London Noir, Neon Lit, Cinema Macabre, the Mammoth Book of Horror and many others. After living in the USA and France he is now married and lives in London's King's Cross and Barcelona.

Only Forward (1994)
Michael Marshall Smith
"Only Forward is about guilt and betrayal, friendship and love, and it's wonderfully funny, witty and thoroughly recommended."

The Alsiso Project (2004)
Andrew Hook and Christopher Kenworthy
"This is what you get when you give creative minds rules and obstacles to overcome. Freshness, originality, wit, cruelty and a certain amount of outrageous slyness."

Too Close to Breathe (2018)
(Frankie Sheehan, book 1)
Olivia Kiernan
"Too Close To Breathe is the kind of police procedural we haven't seen for a long time; a female cop with a traumatic past racing about the mean streets of Dublin, a hanged victim with a strange clue and a dark secret . . . Olivia Kiernan has brought the serial killer thriller back with a vengeance."